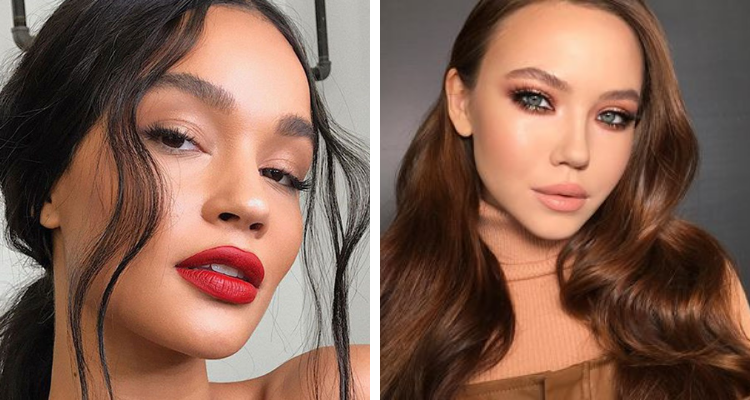 Regardless of how well or badly this year may have passed; a New Year is always a chance to look forward to better, newer opportunities and experiences. If you happen to fancy makeup, this can one of the ways to welcome the new year timeframe. These are makeup looks to try for a New Year’s Eve.

It would be a mild suggestion to try these well in advance to judge if they work well if the outfits planned to wear on the occasion; or that if it needs suitable changes for the better. 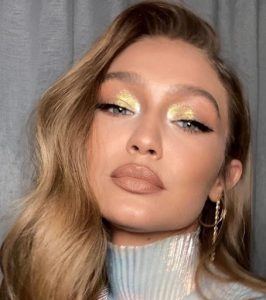 Paired best with something that looks like Belle’s long angelic ball gown in Beauty and the Beast, this look is sure to bring out the best through the eyes.

Prime your lids and find the softest brown shade in your eyeshadow palette collection. Use a trace amount of this eyeshadow; blending it well in the eyelid area. Use a honey or canary yellow over the space of the eyelids, using it more than the brown. Use some of mustard yellow in the outer corners of the eye, blending in an approximate triangular shape.

Set down the fluffy blending brush and use the smudge brush for picking up the right amount of tiger or tangerine orange that would be enough to show up in the outer corner but not submerge the mustard yellow in this area, and blend it well.

Wet a flat shader brush by spraying it with water and pick up a glitter golden eyeshadow to apply over most of the eyelid area that is shaded with honey. Do not blend it. Rub the little finger in a white eyeshadow with the slightest hint of yellow; to apply in the inner corners of the eye.

Fix some doll lashes and draw on the eyeliner with an extended wing. Lightly, brush some peach blush over the apples of the cheeks. If needed, fill your eyebrows preferably with dark brown colour. Optionally, use a fan brush to apply a golden highlighter on the highest point of the face: the bridge of the nose, the cheekbones, the space right below the arch of the eyebrows, forehead, cupid’s bow etc.

Since the eye makeup for this look is pretty dramatic, the choice can be made to keep the lips subtle or sharp. For a sharper look, use blood red lipstick or lip tint to fill the lips. For the alternate, lightly fill in with orange and brown lipstick and mix it well. 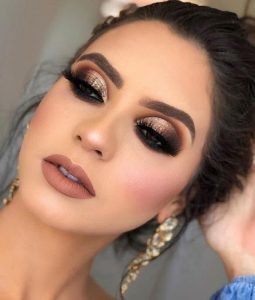 New Year’s Eve parties are generally held at night and if your style is blending in with the elements of the location, smoky eyes are good to adopt.

Prime your lids before you start. If you have visible dark circles, cancel them out with yellow or orange concealer before you begin the makeup artist course.

In the palette of browns, look for a shade of brown close to or darker than the brown you would ideally use for contouring the face. Apply it over the eyelid area and blend it outwards, making sure not to touch the eyebrows. Use some black to blend it in the browns. Since, black eyeshadows can be strong, build it up by using a little a time, so as to not make it look like a fight wound on the eye. Once the black looks distinct enough on its own and does not match the fight wound criterion, stop. Find a copper eyeshadow to apply in the centre of the eye lid space with the flat shader brush.

Use a lip brush to apply burgundy lipstick cleanly and make a pronounced cupid’s bow. Contour your nose by using the right kind of brown from contour palette and draw two thin lines starting from the eyebrows down the sides of nose bridge. Using the blending brush in an upwards motion to blend the lines. The makeup tips here of using an upward motion as opposed to the downward motion with respect to the plane of the face which will give the appearance of a thinner, commonly more desirable nose shape.

Using some bronzer powder to brush under the cheekbones, on the temples and the jawline to accentuate it. Use the same bronzer powder on the lines of throat and collarbones if the outfit makes them visible. Use of highlighter is optional, but recommended.

For hairstyles that could match the eccentricities of the golden look, a simple hairstyle could be: curling the hair to make beach waves. With more time to spare, one could always build a French braid.

A more appropriate but simple hairstyle for the smoky eyes, would be a long bob with or without bangs. As a matter of choice, a simple ponytail can be upgraded for the look too.

Since, braids do not show up well on brunette hair simpler hairstyles like so can be chosen by them as well. This is the simple makeup and hairstyle suited for a party.

Dealing with hatred for the siblings

Elevator shoes – grow and gain confidence in yourself

How to match your earrings with hairstyle