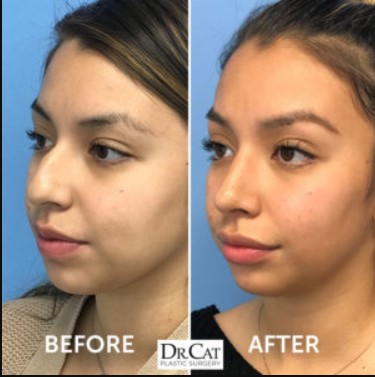 Rhinoplasty: Better quality of life with a beautiful nose

The nose is not only an important sensory organ, but the shape of the nose also determines the visual appearance of every person. It can even lead to other people judging us negatively because of an unsightly nose. Unfortunately, there are only a few people with a perfect nose.

The nose, forehead and chin determine the harmony of our face shape. A nose that does not harmonize with the face and with which one is not happy is perceived as extremely annoying for many people. No matter how shapely and symmetrical the face is, a nose that is too big or not straight can negatively affect the overall picture.

It is not for nothing that the nose is called one of the most distinctive features of our face. Depending on the characteristics, it makes us look lovely, masculine, strict or even snooty. Similar to our eyes, it is subconsciously associated with personality traits. Many men and women sometimes find their nose inharmonious to their face – they cannot identify with the size, width or length of their nose.

The shape or size of the nose can be corrected with a corresponding rhinoplasty operation.

The form and function of the nose must not be mutually exclusive. A corrected nose should not only fit naturally and aesthetically into facial features, it should also correct functional disorders and enable normal nasal breathing.

Changes in the shape of the nose can have many causes. The most common causes are accidents and injuries. As a result, it can happen that hump noses, saddle noses, crooked noses or combined misalignments develop. Often not only the external appearance is affected, but also the nasal septum.

However, the nose size and shape are largely genetic. In all cases, a rhinoplasty can create a change. The given nasal deformation as well as the restriction of breathability determine the surgical method and the surgical steps.

Aesthetic plastic surgery already offers many possibilities to help people achieve a harmonious nose. Rhinoplasty is one of the most popular cosmetic surgeries around the world. A rhinoplasty brings about a positive change that should help patients to feel good about themselves again and to go through life confidently.

A rhinoplasty (nose correction) is used to treat congenital changes in shape or changes in shape due to accidents. It is one of the most technically demanding procedures in plastic surgery. A difficult and complex procedure, as there are many nerves in the nose that should not be injured.

Usually during a rhinoplasty, the cartilage and the skeleton inside the nose are prepared in precise surgical work and then modeled according to the circumstances and feasible ideas. A nose job is usually done under general anesthesia. Depending on the surgical method, the procedure can also take place in twilight sleep or local anesthesia. The procedure takes about one to two hours.

There are two techniques for doing this.

Closed technique in which the incisions are made exclusively inside the nose and the nose is corrected from the inside through the nostrils.

Open technique, in addition to the incisions inside the nose, make a very small incision on the bridge of the nose. This gives him a precise overview and can fix unsightly nostrils and straighten the nose. The nasal septum can also be straightened or the shape and position of the nasal tip can be moderated. Skin, cartilage and bones can be removed or rebuilt with implants or grafts.

The open technique offers several advantages over the closed technique. The results are often characterized by greater stability and make it easier to fix the nose in a new position. The incision is made in inconspicuous places. With normal wound healing, the fine scars are no longer visible later.

During these operations, the bridge of the nose can be narrowed. Nose humps smoothed and the tip of the nose modeled and / or lifted. A nasal alar reduction and a functional correction of the nasal septum can also be performed.

The largest swellings subside within 2 weeks after the operation. A physical rest of 6 weeks is recommended. A nasal splint and / or a tape bandage should be worn for about 2 weeks. The association acceptance takes place approx. After 7-10 days. If necessary, take the prescribed medication. It is then advisable to wear a tape bandage for several weeks. This is usually always applied in the evening after work and should ideally remain on the nose overnight.

Cost and where to get it

Depending on where you live, rhinoplasty can cost you a minimum of £ 3000 to £ 4000. So, if you are living in a country like England, France or Germany, it is best if you travel abroad for surgery as cosmetic surgeries cost a lot less in other countries. Nose job in Turkey is a good idea, along with a wide range of other cosmetic procedures. While many countries like Poland, Lithuania or Tunisia etc. offer cheaper rates, the reason we suggest getting a nose job in Turkey is because it has the best cost to quality ratio, as you should never

The opportunity to go wild camping